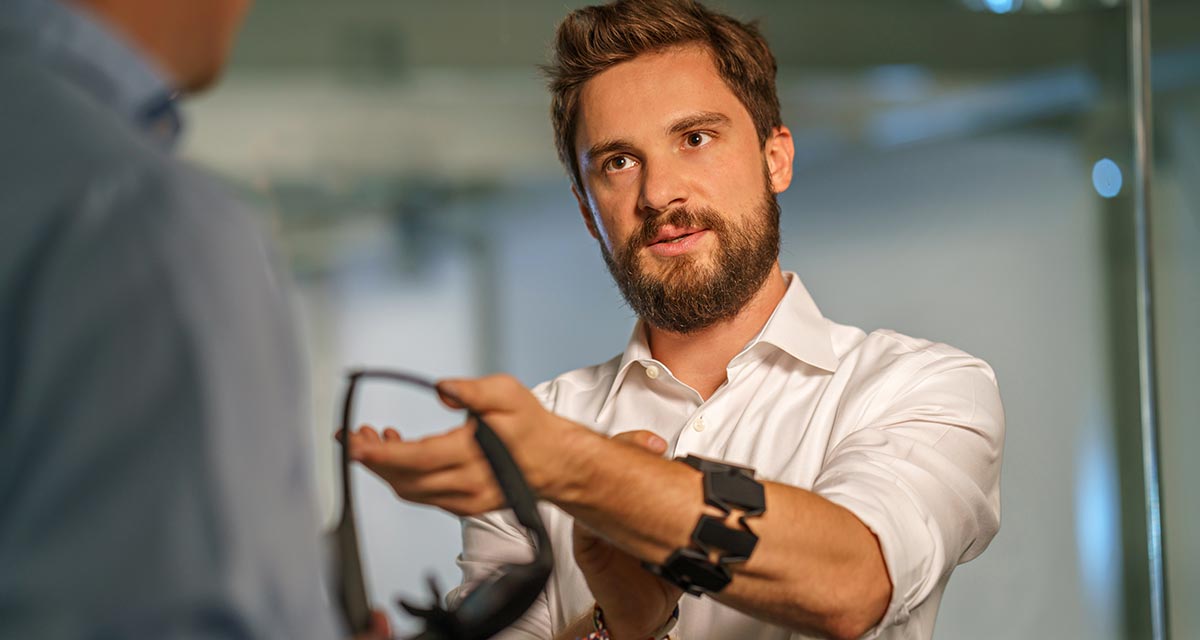 Get involved: the Innovationlab Hybrid Services in Logistics does not do its work locked away in ivory towers. People from the worlds of business, science and society can come to the research centre and the application centre and get an impression of the new working world in the age of the fourth industrial revolution. Companies can get directly involved in the activities at the innovationlab and contribute towards developing technologies, methods, proceedings and tools on site. The knowledge that is developed here is of course also available to other companies. The objective is to initiate a dialogue with the worlds of science, business, politics and society. We aim to create a new active knowledge community with events, excursions, tours and projects.

Increase your company’s innovative capability: we particularly want to support small and medium-sized companies to develop hybrid services for a socially networked industry and to establish these successfully in companies or to offer them as market services. Specific transfer projects are what is significant here. By using this format, you can check out specific result modules in your company together with the scientists and implement them in your work processes.

Companies can submit ideas for transfer projects that are then put out for tender in a two-round competition. If you have any questions, please do not hesitate to contact us at info@innovationlab-logistics.com.

See for yourself how hybrid services work: we show you thrilling use cases with our showcases in the state-of-the-art application centre at Fraunhofer IML in Dortmund. Each use case is demonstrated in an individual so-called adventure path that connects different functional areas with each other and makes use of numerous hardware and software developments.

Companies can experience the use cases »live«. If you are interested in a demonstration, send us an email to info@innovationlab-logistics.com.

03 Talk about it : Glossary

Hybrid services in logistics – what’s that all about? In this section we have listed some of the new technical terms used in the networked economy and provide some initial definitions. We will add to the glossary on a regular basis.

A hybrid service in the innovationlab denotes a bundle of services made up of a product and complementary value adding services made possible by combining innovative technology and novel software. The hybrid service is complemented by a suitable business model and is clearly oriented to customers’ (future) requirements, for example, for modern accounting procedures. The accompanying changes often mean it is necessary to reorganise operational service processes and they make increased demands for action on all the people and organisations involved in the added value network.

The term socio-technical system is not really defined uniformly in the research community. For the Innovationlab, a socio-technical system is to be understood as a production unit, with reference to Rice (1963), that consists of inter-dependent technological, organisational and personal sub-systems. The sub-systems influence each other mutually und restrict the design possibilities of the other respective sub-systems, however they do feature independent characteristics retroacting on the functionality of the entire system. Moreover, the socio-technical system has complex relationships to its environmental conditions. Not only are the functionality and changing processes of individual technical and non-technical elements in demand, but the interdependencies and certain configurations of elements become the focus of the analysis.

In the Innovationlab, »human-technology-interaction« is seen as the superordinate term for collaboration between people and technical facilities to support and facilitate logistics processes. Technical facilities indicate existing and planned devices in the testing environment that are able to interact with one or several interaction partners. The basic requirement for interaction is the ability to communicate, i.e. to send and receive messages via at least one information channel (visual, acoustic, etc.), and above and beyond that, from a sociological point of view it is also necessary to have the ability to react, to be able to deal with and to influence each other and if necessary even to take control. Interaction can take place at different levels of intensity. It can for example include devices that have a graphic user interface and it also includes devices that change the position or the status of equipment and that can take on power and momentum.

The term »human-technology-interaction« used in the innovationlab comprises the established but often not exactly defined and synonymously used terms of »man-machine-interaction«, » man-machine-communication«, »man-robot-interaction« und »man-computer-interaction «. This takes account of all necessary technical facilities that correspond to the above-mentioned definition and that are necessary for carrying out a manual logistical sub-process. This allows an integrated consideration of future working systems and their human-centric configuration to be carried out.

Planning configuration as a creative process for creating a »conceived reality« can be transferred into a process for creating a »virtual reality« by means of digitisation. This means that, in the course of digitisation, planning configuration becomes digital design. It is the objective of digital design to evaluate planning results (e.g. by simulation) methodically and in time to make them available to a wide circle of users. The virtual reality that results from this can be experienced by all people participating in and impacted by the planning enabling a new form of participative configuration for logistics systems.

The digital design supplements the use of planning tasks in the innovationlab and visualizes them with the help of new technologies. This can be observed in both the simulation-supported control station and in the Virtual Training Lab in the “Virtual Training” showcase.

The scientists of the Innovationlab regularly publish research results in journals, conference papers or anthologies – both at national and international level. Here you will find a selection of publications, sorted by publication year, as well as references to conferences at which the researchers presented their work.